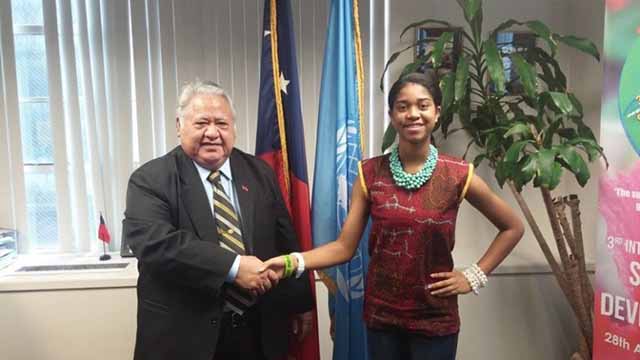 Zuriel Elise Oduwole is an amazing 14-year-old female education advocate and filmmaker. She is among people in the forefront of the campaign for the African girl’s rights and girl child education.

At 12, Zuriel became the world’s youngest filmmaker, having self-produced and self-edited her documentary, A Promising Africa, screened in over three countries.

She has met over 20 Presidents and Prime Ministers of different countries, including Jamaica, Nigeria, Kenya, Tanzania, Malawi, Liberia, South Sudan, St. Vincent and the Grenadines, Guyana and Namibia, through her advocacy programmes.

Zuriel’s advocacy has unsurprisingly made her the youngest person to be profiled by Forbes Magazine. She was also listed as the most powerful 11-year-old in the world by Business Insider Magazine and just last year, Elle Magazine listed her in their yearly feature of ‘33 Women Who Changed The World.’

Despite the accolades and the various amazing works, one expects the 14-year-old crusader to take a rest, but with her intense passion for positive social change, it is clear that she is just starting.

She talks about her ideas, vision, foundation and what she hopes to do in future.

In the Summer of 2013, at the age of 10, Zuriel made her Forbes Magazine feature debut, when Forbes Africa title recognised her early work in the girl-child education environment, before it became the policy of many countries across the world.

In January 2017, she was honoured in Washington DC by the US Secretary of State, John Kerry, for her work in the area of Girls Education Development in Africa, and her new idea of skill transfer to unemployed youths in the continent.

Zuriel, who has spoken to more than 24,900 youths in 11countries and met one-on-one with 23 Presidents to talk education policy, took it all in her strides. Former United State Secretary of State, John Kerry, described her as The World’s Most Powerful Girl.

Zuriel is so proud of herself because she does not give up easily and believes things will go the way the Lord wants them.
[ad unit