A peep into Udu Kingdom, the people, their history 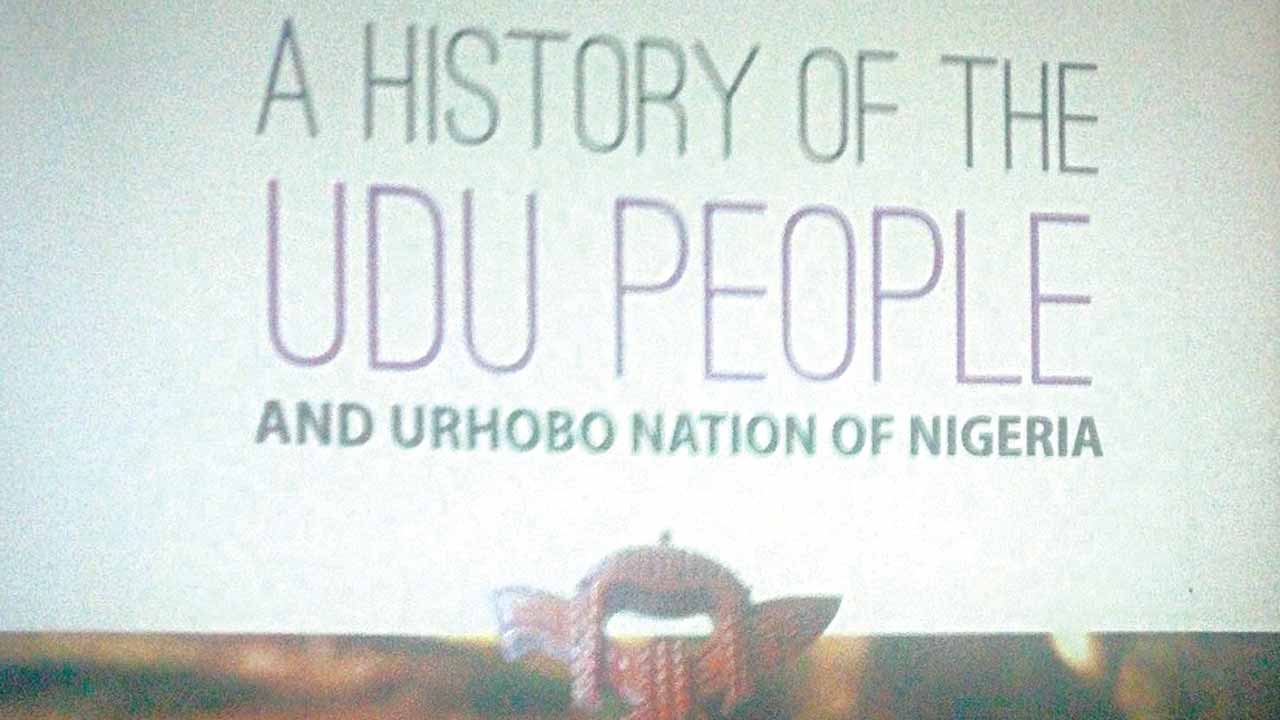 There’s something vainglorious about trying to sum up a race, a people or a kingdom in a book: It often appears as one dish menu. But A History of The Udu People and Urhobo Nation of Nigeria, edited by His Royal Majesty, Emmanuel B. O. Delekpe, Ohworhu I, the Ovie of Udu Kingdom, is an exception.

The book marries a lot of issues and trajectories into an overall story. This requires some chutzpah, which the Ovie has provided. Though not a historical sweep, from foundation to the present, however, it offers information without the pretense of narrative.

The book reads like the large-scale compendium of sources and an encyclopedia of a personal kind, something you can dip in and out of.The general belief is that you cannot judge a book by its cover, but you can judge this, after all, if you’re going to walk through the 249-plus pages about a people, the guide has to be reliable, and better still, entertaining. Edited by a lawyer-king, who is a jurisprudential anthropologist, it is not a surprise there are legal documents to buttress facts laid bare by the contributors.

In 249 pages and 12 chapters, the book takes the readers through a journey of unraveling history, especially the part, which is distorted. With good pictures, illustration, appendices and references, the reader is inundated with a whole gamut of sources to interrogate.“It is so because it has unraveled the mystery behind the general statement of historians purporting that Udu does not have a foundation in Urhobo land,” Ovie of Udu says in the preface.

With a statue depicting Prince Onirhe lifting up Udu crown, the reader is led into a journey into history. Interesting history, so to say. The first picture in the book is statue of Mother Udu at Udu roundabout, Ovwian, Udu Council of Delta State. The second picture is that of Ohworhu I, Ovie of Udu Kingdom. Thereafter, the reader is led to dedication page. A rich, colourful dedication that panders to the very origin of the book.

A cursory look at the dedication is enough to tell you the founding fathers and mothers of Urhobo nation, particularly Udu and Onirhe land.Detailed and factual, the book goes on to foreword written by Professor Peter G Hugbo, pioneer Vice Chancellor, Western Delta University, Oghara, Delta State.

The foreword raises need to document history of a race, people or community “to ensure for posterity, their travails as they wandered about in search of suitable settlements, their cultures and customs and subsequent growth and struggles for political emancipation,” Hugbo explains.

Arising from the need to correct a wrong impression about Udu history, the Ovie had set up a Royal Historical Team, made up of persons of knowledge and experience of the kingdom: History, culture, traditions, growth and development. Each person deploying his knowledge and expertise.

The first chapter is in introduction to the Urhobo nation. Titled, The Urhobo Nation: An Introduction by Jomata Igben, the chapter gives a panoramic view of this nation. The chapter takes a holistic view of the various theses of origin of Urhobo people, with a view to providing a background to the history of the Udu Kingdom, which is the object of this book. Igben interrogates the autochthonous, the emigration and origin theories earlier postulated by Onigu Otite and Peter Ekeh, both great scholars of Urhobo history.

The second chapter, Evolution of Urhobo Nation by Emmanuel B. O. Delekpe, is a detailed exposition of the evolution of Urhobo people. In this chapter, the book’s editor, through his wealth of experience as a king, reveals that the Urhobo and the Binis are agglutinated by similarities of languages, inter marriages, consanguinity, customary, cultural and traditional practices and ethos. The chapter is very expository and lucid in narration. There is no attempt to make history befuddling.

Chapter three, Overview of Udu Clan and Its People by Isaac Lafua and Jomata Igben, examines Udu clan and its people from historical to geographical perspectives. Chapter four, written by the editor, is another exposition of the emergence of the kingdom within the broad spectrum of Urhobo nation. Chapter five, also written by the editor, x-rays the pre-monarchy central administration in Uduland, in which political power was shared between the Evwrirhe and non-Evwrirhe groups, based on primogeniture.

In chapter six, Luke Ogedegbe looks at the Traditional Administrative System in Uduland while Wilfred Akemu interrogates the introduction of British rule to Uduland in chapter seven. The culture of Udu people, divided into two components, religion and social life, are discussed in chapters eight and nine by Elizabeth Odjugo.

Luke Ogedegbe, Elizabeth Odjugo and Jomata Igben discuss the history and development of western education in Uduland in chapter 10. Chapters 11 and 12, written by the editor, deal with the origin of the village groups in the kingdom, and their neighbours from a historical perspective. No doubt, the two chapters are revealing and the Ovie’s knowledge and expertise as a custodian of the people’s culture and tradition are judiciously used.

An accurate and capably told history of Urhobo, the book is thoroughly researched and presented in exhaustive detail. It is a must read for every Udu son and daughter and every Urhobo person. More importantly, every library and legal practitioner, whose focus is land law in Delta will find it a rich trove.

Ara, the Goddess of Drum and her passion for culture

A peep into 2020 Sotheby's Modern and Contemporary African art auction