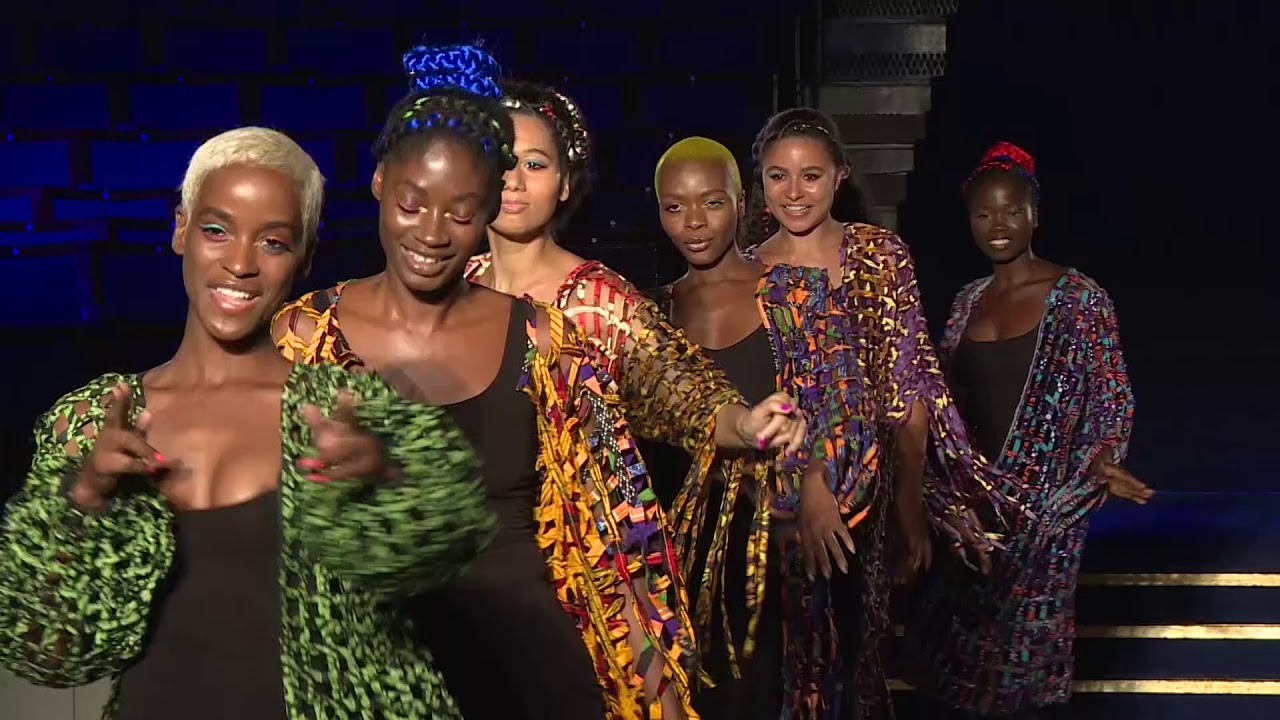 Held at the cavernous Freemanson’s Hall in West London – its new home since moving from the huge halls of Kensington Olympia in 2017 – the high profile guests include; Her Excellency, Queen Diambi of DRC Congo, First Lady of Ekiti State (Nigeria), Her Excellency Erelu Bisi Fayemi (Nigeria) and First Lady of Kwara State (Nigeria), Her Excellency Olufolake Abdulrazaq; and Deputy Mayor of Social Integration and Community Engagement Debbie Weekes-Bernard of the London Mayor’s Office.

Headliner Vanessa Gounden’s “Africa Rising” collection was a feast of bold prints and painterly abstractions that prides itself on combining 3D printing and revived traditional South African techniques that have led to descriptions of her work as “wearable art”. Gouden – a mining magnate and former political administrator under presidents Nelson Mandela and Thabo Mbeki – first launched her luxury label in the UK in 2011 followed by her flagship store in London’s Mayfair in 2015.

Another highlight was Soboye, the eponymous label by the British-Nigerian designer Samson Soboye, who is also the head stylist for AFWL for the fifth year in a row.

British-Ghanaian Grace Owosu’s black leather and latex collection was a particular delight in the manner she reclaimed the chic in leather from associations with the gothic or sadomasochistic. A fashion student at the University of Northampton (UK), Owusu won a scholarship early in March for her final year collection whose success led to her inclusion in this year’s Africa Fashion Week London.

Tulle – a signature of MM London – featured in just one dress in “Blood Sweat and Tears” the debut men’s wear line by last year’s headliner Mary Martin whose headlining slot was dedicated to the 400 year anniversary of the trans-Atlantic’s slave trade. “She’s extra, she’s amazing. I love Mary Martin London” said co-host Mercy Modupe Ajisafe of the impressive switch to men’s wear which continues to showcase Martin’s elegance with luxurious colours and patterns.

Nigerian film director Kunle Afolayan (Phone Swap, The Figurine) debuted his brand “Ire Clothing” which offered new interpretations on dashikis and “Kunle’s kembe” trousers native to Yorubas. “The fact that it is being exposed to this community makes it a big deal for me,” said Afolayan of the one year old brand was also available for sale in the exhibition stalls attended to by Afolayan and assistants.

For the first time this year, Africa Fashion Week London has patterned with sister companies EPG Media and Bluxe as commercial partners who have introduced new segments to the two day event that includes business forums, a celebrity charity catwalk and the Blux luxury boutique with an aim to draw a variety of audiences.

Located in London’s Covent Garden, the central auditorium of Freemasons Hall has two sections; the upper levels which were closed off for the event while the main floor – a capacity of 900 seats – was had a considerable turn out on the first day (Friday) and was completely packed during the catwalks on the second day (Saturday).

“The moment you start working in Nigeria, your whole life is absurd,” said Italian born Simone Cipriani, the creator of Ethical Fashion Initiative, a joint organisation by the World Trade Center and the United Nations. He was speaking during a panel talk titled “The Business Of Fashion” which drew questions about sustainability and ownership in the continent’s fashion industry.

“Affirmative action is the key to diversity” added Capriani in a long list of declarative statements on African fashion that is independent of international markets, and of fairness and equality in the industry.

One individual – the model Misty Bailey – had an unpleasant experience backstage that led to expulsion from the venue, a male photographer who had asked to take nude photos of her. This happened on the second day and soon before she was to walk on stage for the first catwalk show of the day. “If I didn’t speak up, nobody will. It’s my duty to say something” said the Jamaican model (and singer) who described the unidentified man as “a creep”. A press officer of Africa Fashion Week London confirmed Bailey’s report. In addition, the unidentified man – who has worked as an independent photographer at previous editions of the fashion show – had every image on his camera deleted by the security guards after which he was banned from the venue. The experience spoiled what was an otherwise successful night for the star model who received cheers from the audience regardless of what designer’s outfits she wore on stage.

Cohost Mercy Modupe Ajisafe was full of higher praise; “it is the biggest African fashion event in Europe”. On both evenings, Ajisafe spoke of the renewed interest of food and music and fashion from the continent. A first-time host for Africa Fashion Week London, the former model was convinced the success of the showcased designers helps to “eradicate unemployment” in the countries the clothes are produced: “that is something I’m super, super grateful for”.

Healthy kids are happy kids, a recipe for good living

Osewa's rekindling of Tales By Moonlight

I Am Amazon concert set to hold Friday

Why I wrote anti-graft book, by Farida Waziri

In autobiography, Lediji reminisces about life of selfless service

A peep into Udu Kingdom, the people, their history