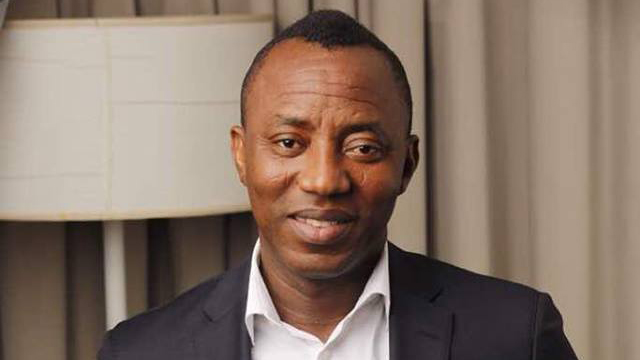 The officials of the Department of Security Service Friday re-arrested the convener of RevolutionNow Omoyele Sowore barely 24hours after his release.

Sowore was released on Thursday night after the court gave Nigeria’s secret police a 24-hour ultimatum to release him.

The court also awarded N100,000 against the prosecution for failing to comply with court orders requesting the release of Sowore and for not serving the defense counsel with necessary documents early enough.

The penalty, Justice Ijeoma Ojukwu said, must be paid to the defendants before the commencement of trial.

The judge consequently adjourned hearing till Friday but the officials of service stormed the court, disrupted the trial and arrested Sowore.

Sowore has been in DSS detention for 124 days. Sowore was first arrested by the DSS on Saturday, August 3 for planning a nationwide protest tagged #RevolutionNow.

The Nigerian government filed additional charges against Sowore on Friday, September 20, a day before the completion of the initial 45 days the court allowed the DSS to keep him in custody.

Sowore’s lawyer Femi Falana in an earlier affidavit told the court “that the applicant (Sowore) herein has never been charged with any criminal offence whatsoever” and should be granted bail.

Justice Inyang Ekwo of the Federal High Court in Abuja on Monday granted bail to a former Nigerian senator, Shehu Sani, in the sum of N10 million with one

State governors under the auspices of the Nigerian Governors' Forum have resolved to address the lingering issue of Right of Way (RoW) charges, the Minister of Communication and Digital Economy, Isa Pantami, has said.

Man kills own children, injures another in Ebonyi