Resort to violence cannot save you, PDP tells Yahaya Bello 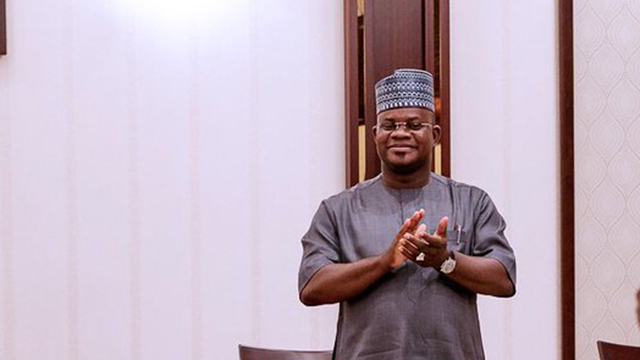 The Peoples Democratic Party (PDP) has accused Governor Yahaya Bello, and the ruling All Progressive Congress (APC) of masterminding the disruption of the party’s governorship primary election held at the Confluence Stadium, Lokoja, on Tuesday, when unknown gunmen had invaded the party’s primary election venue at the point of votes’ sorting and counting.

PDP has, therefore, issued a stern warning to Governor Bello and APC of impending disgrace in the November 16 governorship election.

However, Director-General, Media and Publicity to Governor Bello, Kingsley Fanwo, said PDP should face its business and leave the governor alone, saying APC has had a peaceful primary and had no interest in PDP’s affairs.

In the statement issued on Wednesday by the National Publicity Secretary, Mr. Kola Ologbodiyan, and made available to journalists in Lokoja, he said the resort to violence and bloodletting would not save the failed governor and his party, APC.

According to Ologbondiyan, PDP and the people of Kogi State are firm in their resolve to use every means available in a democracy to confront and vanquish APC’s evil plots ahead of the November governorship election.

The statement reads in part, “It is clear to all that Governor Yahaya Bello has become chaotic in the face of his rejection by the people as well as the soaring popularity of PDP in Kogi State, and has now resorted to violence in a failed desperate attempt to prevent our party from presenting a candidate for the election.

“For the avoidance of doubt, PDP had a peaceful, decent, clean, clear, credible, and transparent process in the conduct of our primary. Accredited delegates had voted and the balloting had been concluded in a very orderly manner before the vicious attack by the gunmen, who were shouting pro-Bello mantra and accompanied by known APC faces.

“The PDP only has pity for Yahaya Bello and APC because our processes are still intact and nothing can sway our resolve as well as strong will by the people of Kogi State to kick them out of office in November.

“This is more so as the attack has further united our governorship aspirants, critical stakeholders, leaders and teeming members and supporters across the state for a common front against Yahaya Bello and APC.

“Indeed, nothing can detract from this, as the attack has further united and bolstered the people of Kogi State to remain behind our party in the decisive struggle and the noble objective to liberate their state from the violent and suppressive forces.

“Our message to Yahaya Bello and APC is that their days in office are already numbered and that they cannot stay a day beyond the stipulated hand-over date.

“In resorting to the violence and forceful occupation, APC and its rejected governor should have known the people of Kogi State have never in history bowed in subjugation to anybody no matter the force or intimidation.

“That spirit of resistance to oppression and force has been triggered and we caution APC to steer clear of the wrath of the people, who have decided to take back their state by voting in PDP come November 16.”

But in a swift reaction, Governor Bello urged the PDP to face its internal problems instead of looking elsewhere. In a statement, Director General, Media, and Publicity to the Governor, Kingsley Fanwo, said, “The APC has a seamless primary without violence. PDP should face their internal chaos instead of blaming their woes on the governor. This is the lowest PDP can condescend, blaming the wanton bloodletting at their own primary on someone who had no interest whatsoever in their party affairs.

“Security agencies are already investigating the violence and will tell the public their findings. As a responsible government, we would not want to issue statements or engage in activities that could jeopardize the investigations.”

However, Governor Ahmadu Fintiri of Adamawa State has commended his counterpart in Kogi, Bello, and the security agencies for their support towards the conduct of the PDP primary election in Kogi. Fintiri, who doubles as Chairman of the PDP Electoral Committee for the Kogi governorship election, gave the commendation when Governor Bello led heads of security agencies in the state on a courtesy visit to him in a hotel in Lokoja after the shooting incident that occurred at PDP’s primary election.

Fintiri said that he had enjoyed tremendous support from Bello and security agencies since he and his team arrived at Kogi State. He noted that the exercise was almost completed when the sad incident occurred, adding that eight out of the 10 ballot boxes were already counted remaining only two.

Fintiri expressed worry that there might be some form of a conspiracy within the ranks of PDP, which might have caused the incidence.

“Our arrangement was to start the process at 7.00am but delegates were not coming forward for accreditation and even aspirants arrived venue late. ‘We did accreditation till about 4.00 – 5,00pm. And again, the shooting came through a part of the stadium where the floodlights went off.

‘’When I arrived on Monday evening, I went to the venue, inspected everything, including the floodlights and they were in good condition. The floodlight went off while sorting was going on and before you know it, gunshots started coming from that angle.”

Earlier, Governor Bello had told his Adamawa counterpart that he led heads of some security agencies in the state to his hotel to commiserate with him over the unfortunate incident that took place during the primary in the early hours on Wednesday.

Governor Bello condemned the incident in strong terms, stressing that what happened at PDP’s primary did not reflect the character of the good people of Kogi State. He urged the opposition party to put its house together to complete the exercise. Bello affirmed that a marching order had been given to security agencies, after an extensive meeting, to fish out the perpetrators of the dastardly act.

How Metuh Tried To Humiliate Me —Justice Abang

Security Situation To Get Worse –Ekweremadu

Peruzzi - Only One (Official Video)

AFRICAN HOME: THAT ONE AUNT