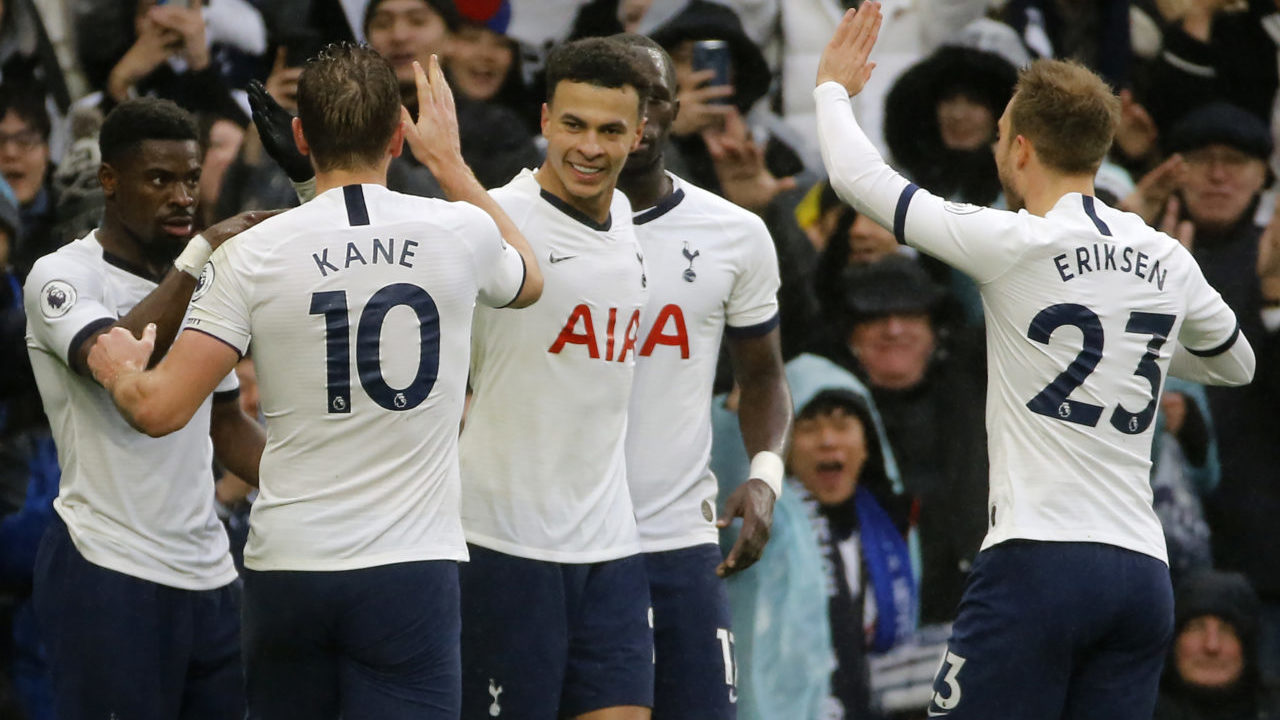 Dele Alli got Tottenham back on track as the England midfielder capped a gritty escape act with the late winner in Thursday’s 2-1 victory against Brighton.

Jose Mourinho’s side were in danger of a second successive Premier League defeat when Adam Webster headed Brighton into a shock lead at the Tottenham Hotspur Stadium.

But Harry Kane equalised after the interval and Alli finished off a flowing Tottenham move in the closing stages to erase the bitter taste of last weekend’s acrimonious London derby loss to Chelsea.

“I’m very happy with second half. I’m not saying players were wrong but we changed bits and that makes a difference,” Mourinho said.

“It’s hard after a defeat to have confidence and we started poorly, it affects the confidence. Brighton have monsters in the air and it affected the self-esteem of our team.

“In the second half the players put all the negative aside and were very strong in their performance.”

Avenging their defeat at Brighton in October, Tottenham, unbeaten in Boxing Day fixtures since 2003, have won three of their last four league games as they try to climb into the top four.

Saluting Alli’s crucial contribution, Mourinho said: “Another goal and another incredible performance and effort. The work rate was absolutely incredible from Dele.

“The little details are more important than what people look at. His attitude and fighting spirit was so good.”

That Chelsea setback was completely overshadowed by the alleged racist abuse of Blues defender Antonio Rudiger by Tottenham fans after his role in Son Heung-min’s red card.

Amid widespread calls for stronger action to stamp out racism in football, Tottenham fans appeared to behave better this time.

Since Mourinho’s first game in charge of Tottenham, no Premier League team had conceded more goals than the 14 his side allowed across all competitions heading into this round of matches.

Those defensive frailties were on display when Steven Alzate lost his marker and forced Paulo Gazzaniga into a sprawling save.

Kane has a knack of scoring on Boxing Day and the Tottenham striker thought he had netted again when he fired home from Winks’ pass, but the goal went to a VAR review and was ruled out by the narrowest of offside decisions.

Brighton made the most of that let-off to take the lead in the 37th minute.

Pascal Gross swung over a free-kick and Webster rose above Toby Alderweireld and Davinson Sanchez to plant a powerful header past Gazzaniga for his third goal of the season.

Mourinho must have been furious that Tottenham wilted against such a simple set-piece and his team’s record of one clean-sheet in his nine matches suggests a defender could be high on his January shopping list.

Underlining the urgency to address that problem area, Brighton’s Bernardo forced Gazzaniga to save from a corner moments later to the audible frustration of the Tottenham crowd on a dank, wet day in north London.

Mourinho, standing rain-soaked on the touchline, revealed before the game that his Christmas was ruined by the death of his family’s pet Yorkshire Terrier.

But Kane put a smile back on his manager’s face in the 53rd minute when he seized on a deflection off Lucas Moura after the Brazilian’s determined run.

Drilling a shot that Mat Ryan could only push back out, Kane gobbled up the rebound with a clinical finish for his eighth goals in five Premier League games on Boxing Day.

Kane’s 16th club goal this season was followed by Mourinho making a significant switch when he sent on Christian Eriksen for Harry Winks.

Eriksen made an immediate impact in the 72nd minute when he floated a delicate pass to Serge Aurier who flicked the ball into the path of Alli, who guided a superb lofted finish over Ryan.

Five ties to watch in the Europa League this week

All set for 2020 Lagos City Marathon

Coronavirus evacuees cause clashes in Ukraine