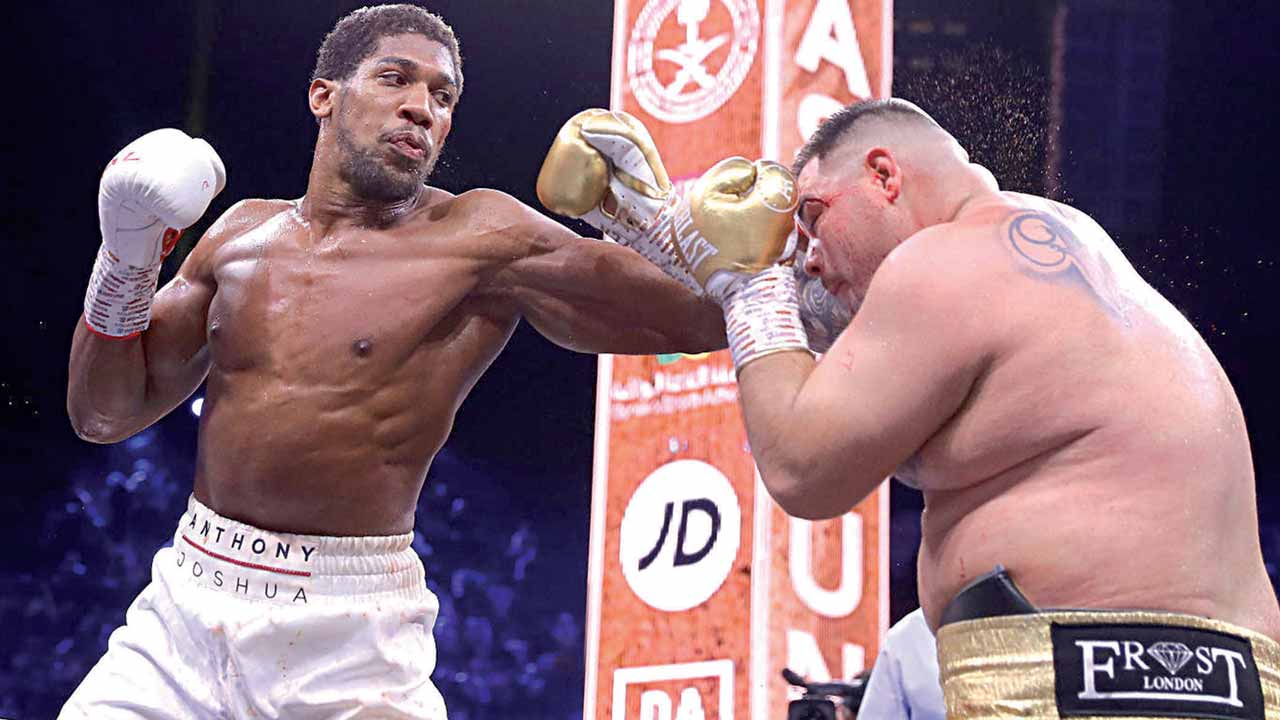 The visit by World Heavyweight Boxing Champion, Anthony Joshua, to his hometown, Sagamu during the week may have brought back some old memories of great legends, who at one time or the other rose to the pinnacle of their career in Remo land.

From the era of the late premier of the old Western Region, Chief Obafemi Awolowo, Remoland has been on world spotlight for dacades, turning in other legends including Funmilayo Ransome Kuti, Nigeria’s playwrights and theatre director, Ola Rotimi, Fela Anikulapo Kuti, Ernest Shonekan, Oladipo Diya and Tai Solarin.

On Wednesday, the town of Sagamu witnessed an unusual crowd, when Joshua was given a hero’s welcome during his unscheduled visit to the town, his first appearance in Nigeria since he reclaimed his WBA, IBF, WBO, and IBO titles from Mexico’s Andy Ruiz in Saudi Arabia.

Joshua’s visit to Sagamu was celebrated by hundreds of fans, who surrounded him, singing praises during his visit to the Alafin Elepe palace and the Akarigbo of Remo land.Joshua has his family roots in Sagamu, one of the towns that make up Remoland. It shares common boundary with Ikenne, home of the late political sage, Awolowo.

Awo, one of the three national heroes of the Nigerian nation (along with Alhaji Sir Ahmadu Bello and Dr. Nnamdi Azikiwe), was a special breed politician, great motivator, elder statesman, activist, writer, nationalist and excellent manager of men and materials. He went through the thick and thin at different phases of his life, preparing his people for the challenges of tomorrow.

While the great Awo rose to the pinnacle of his career as politician, Anthony Oluwafemi Olaseni Joshua has become one of the most popular figures in the world through boxing.

Joshua has put Sagamu and the entire Remoland on the spotlight since he burst into limelight in 2014. The Chief of Staff to Akarigbo of Remo, Alhaji Iliasu Aina told The Guardian after Joshua’s visit on Wednesday that the traditional ruler would confer a chieftaincy title on him next month.

“Joshua’s visit on Wednesday was an impromptu one,” Aina said. “He is coming back to Nigeria in March, and he is going to be conferred with a chieftaincy title. He is our son and it was really a delight for us to receive him in his hometown on Wednesday,” Alhaji Aina, popularly known as Merry, Merry stated.

Joshua has been approached by Saudi Arabia to stage a mega-fight with the winner of Deontay Wilder and Tyson Fury, according to his promoter Eddie Hearn. Although, there are suggestions that Joshua’s next opponent could be Kubrat Pulev in May this year.Joshua’s visit to Sagamu on Wednesday sparked a big excitement for the people as everybody struggled to get a glimpse of the champion.

Hundreds of fans followed Joshua on their foot from the Elepe palace to the palace of the Akarigbo screaming and shouting his name. On January 18, Anthony Joshua presented his World heavyweight boxing belts to President Muhammadu Buhari during his visit to the United Kingdom. Joshua’s visit to Buhari was celebrated in the local media with the picture of the gangling boxer prostrating before the President in typical style of a Yoruba son greeting of an elder.

The picture attracted several comments from people who eulogised him for not forgetting his Yoruba ancestry despite fighting as a Briton.Anthony Joshua was born in Watford to a Nigerian mother, Yeta Odusanya and a British father of Nigerian and Irish descent, Robert, in 1989.He made his debut alongside his cousin, Ben Illeyemi, who is also a professional boxer, in 2013.

Joshua was reported to have spent some of his early years in Nigeria and was a boarding school student at Mayflower School in Ikenne, hometown of Awolowo.He was said to have returned to the United Kingdom when he was 12 years old.From his first-round demolition of Matt Legg at the Wembley Stadium in 2014, to his victory against Joseph Parker at Cardiff’s Principality Stadium, where he emerged as the world heavyweight champion, to his TKO defeat of Carlos Takam, the devastating knockout of Alexander Povetkin and the TKO against Wladimir Klitschko at Wembley Stadium, Anthony Joshua has been the toast of boxing fans around the world.

At every fight, Joshua always embraces his Nigerian roots, and always makes it known the influence Nigerian culture has on him. He speaks a little Yoruba.“My heart is with Nigeria, my heart is with Britain, I’m a Nigerian man by blood,” he said in interview after one of his victories.

Mikel has nothing else to prove in football, says Udeze

Hopkins, Mosley entry to Boxing Hall of Fame delayed to ’21

'Barcelona has not made any move for Ndidi'

Olympic Games will be known as Tokyo 2020, despite postponement until 2021

Elizade University 'ready' as students get set to rumble