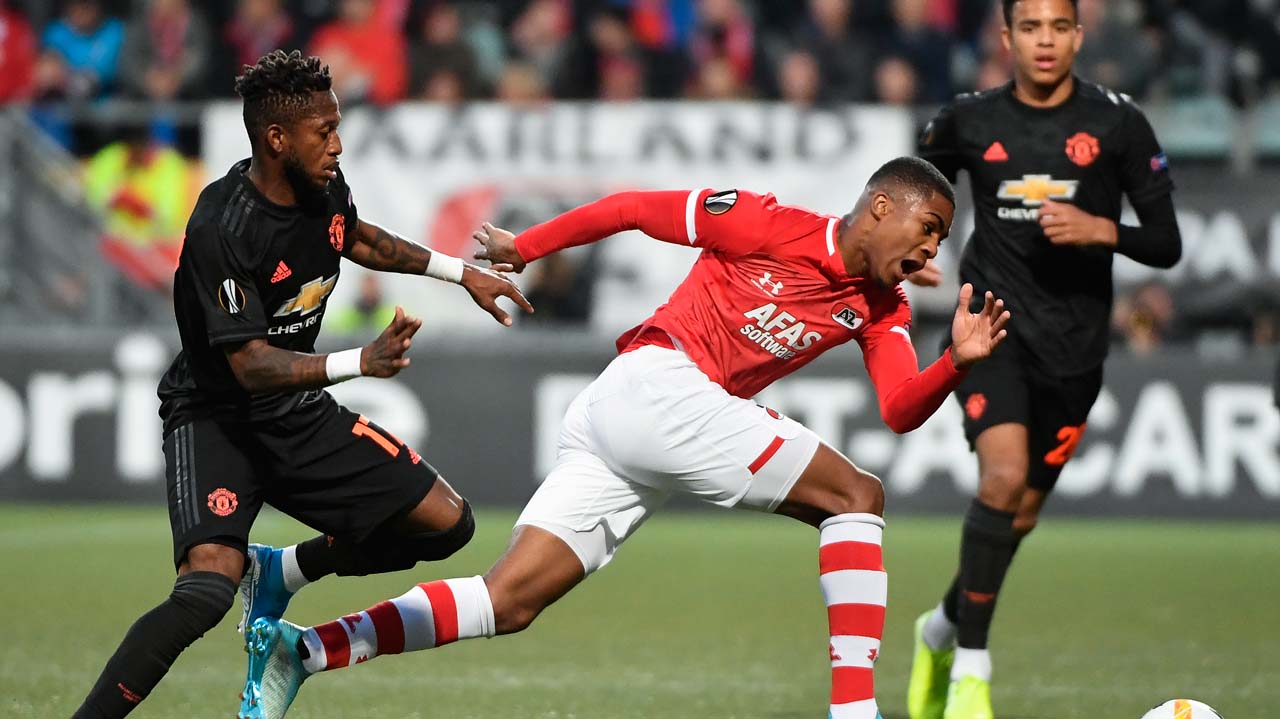 Manchester United stuttered to a drab 0-0 draw against AZ Alkmaar in the Europa League group stage on Thursday, while Steven Gerrard’s Rangers conceded an injury-time goal in a 2-1 loss at Swiss side Young Boys.

Academy product Brandon Williams was handed his first start for United, who saw teenager Mason Greenwood denied by a superb block from Ron Vlaar on 30 minutes.

The game was played in The Hague, on an artificial surface described as “one of the worst” by Solskjaer, after a storm damaged Alkmaar’s home ground in August.

United were without Paul Pogba after the midfielder aggravated an ankle injury against Arsenal on Monday. He was also left out of the France squad named Thursday by Didier Deschamps.

Since their 4-0 thrashing of Chelsea on the opening day of the Premier League campaign, United have failed to score more than once in any match.

They rarely threatened in the Netherlands with substitute Jesse Lingard firing wide and Solskjaer reacting in disbelief when Marcus Rashford appeared to be chopped down in the penalty area.

Owen Wijndal and Oussama Idrissi forced David de Gea into a couple of smart saves at the other end as the draw left United level on four points in Group L with Partizan Belgrade, who won 2-1 away to Astana.

Colombian forward Alfredo Morelos put Rangers ahead just before half-time in Bern, but Young Boys levelled through Roger Assale before Christian Fassnacht grabbed a 93rd-minute winner for the hosts.

Goals from Jens Toornstra and Rick Karsdorp gave Feyenoord a 2-0 home victory over Porto in a clash of former European champions in the other match in Group G.

Wolves, in their first European campaign since 1980, rebounded from an opening loss to Braga as Willy Boly’s stoppage-time goal earned them a 1-0 win at Besiktas.

Braga and Slovan Bratislava drew 2-2 to bump both sides up to four points at the top of Group K, while Austrian debutants Wolfsberg drew 1-1 at home to Roma in Group J.

Arsenal host Standard Liege in Group F later while Celtic take on CFR Cluj, the Romanians who ousted them in the third qualifying round of the Champions League.Five-time Europa League champions Sevilla are also at home to APOEL.

‘Justice for George’: Schalke’s US footballer in armband protest