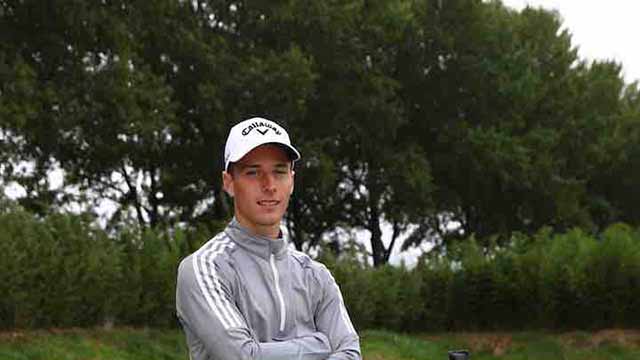 England’s Matthew Jordan stunned the field with a new course record of 63 in the first round of the British Masters yesterday, reports AFP.

The 23-year-old, ranked 837th in the world, carded nine birdies in a bogey-free 18 holes at Hillside.

Jordan, in just his 12th event as a professional golfer, ended the day with a two-shot lead over compatriot Matt Wallace and Sweden’s Marcus Kinhult.

“You never quite expect it,” said Jordan. “I knew I had been playing quite well and just from the get-go it started perfectly and from then on I just kept it going.

“You start to realise you’re doing quite well because more people turn up and you see a couple of cameras.

“I was nervous maybe for a couple of holes, like around 11 and 12, and then I settled back into it.”

Tournament host and Ryder Cup star Tommy Fleetwood was five shots off the lead after an opening 68, with defending champion Eddie Pepperell two shots further back following a round of 70.

Michael Hoey, in a tie for 10th, was the best of the Irish on four-under, while Paul Dunne signed for an opening round 71 to sit eight shots off the lead.