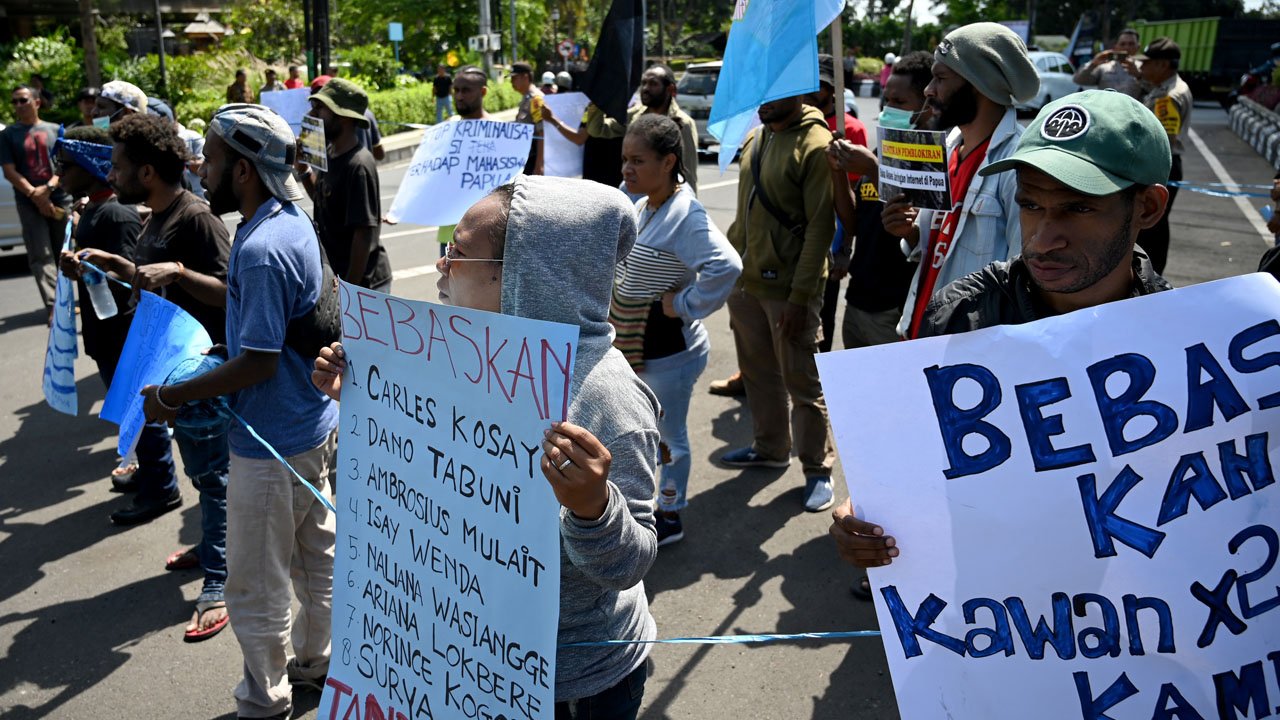 The exiled leader of Papua's independence movement has called for "a free and democratic referendum" backed by the UN and warned over a possible bloodbath after weeks of deadly unrest gripped Indonesia's easternmost territory.

Tens of thousands protested across Papua -- on the western half of New Guinea island -- as anger over racism and calls for self-rule fuelled mass demonstrations and violent clashes between civilians and security forces.

"We need the UN to intervene," Benny Wenda, chairman of the United Liberation Movement for West Papua, told AFP by telephone from Britain, where he has lived for years.

"It's a new era and I'm confident that the world is beginning to notice what's going on."

A low-level separatist insurgency has simmered for decades in Papua, a former Dutch colony after Jakarta took over the mineral-rich region in the 1960s. A vote to stay within the archipelago was widely viewed as rigged.

This week, Indonesia repeated its position that a new independence vote was a non-starter, and pointed its finger at Wenda for stoking unrest.

Authorities also arrested a high-profile Indonesian rights activist for incitement, along with dozens who took part in pro-independence demonstrations.

Wenda -- who angered Jakarta by pushing for a UN rights probe and Papuan independence at a recent Pacific islands forum -- dismissed the government's claims as "politically motivated".

The majority of Papuans are Christian and ethnic Melanesian with few cultural ties to the rest of Muslim-majority Indonesia.

A firestorm of riots and protests broke across the Southeast Asian archipelago nation after the arrest last month of dozens of Papuan students -- who were also pelted with racial abuse -- in Indonesia's second-biggest city Surabaya.

Officially, five civilians and a soldier have been killed in the chaos, but activists say the death toll is higher.

"(The unrest) is going to continue -- I cannot stop it," said Wenda, a former rebel granted asylum in Britain after a 2002 escape from jail in Indonesia where he faced murder and arson charges linked to a police post-attack.

"The people of (Papua) have asked them to look at the root of the problem, but the Indonesian government doesn't want that. They just send more military."

A major clash with security forces could be looming, as thousands of police and soldiers flowed into the region and civilian militias form, Wenda said.

Indonesia's army has long been accused by activists of committing atrocities against civilians in Papua.

"What's happening right now is worrying. It's the next East Timor," Wenda said.

"We don't want to see a massacre and then the world reacts."

Last week, tiny East Timor celebrated the 20th anniversary of its vote to separate from Indonesia, which unleashed a wave of bloodshed perpetrated by the army and its proxy militias.

"We won't win a war with the Indonesian military," Wenda said.

"Our weapon is a peaceful one -- a referendum."

Sporadic violence in Delhi as death toll rises to 33

Egypt held a military funeral in Cairo on Wednesday to bury its former President Hosni Mubarak, who ruled for 30 years until he was ousted in a 2011 popular

Canada to no longer pay for Harry and Meghan security

Sanders would ‘absolutely’ use military if needed