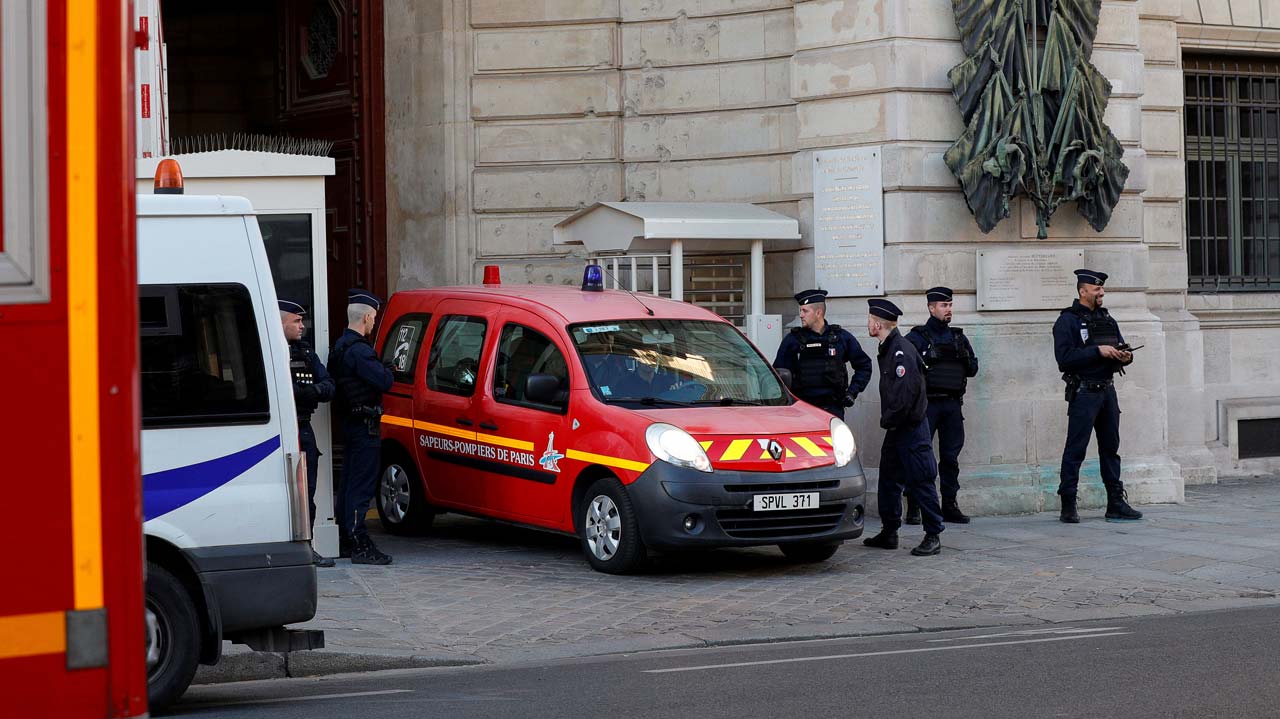 A longstanding IT staffer for the Paris police headquarters stabbed to death four colleagues at the building in the heart of the French capital on a knife-wielding rampage Thursday before he was shot dead, officials said.

A fifth person was critically injured and was being treated in hospital after the deadliest attack on police in France in years, which sent shock waves through an embattled force already complaining of low morale.

Paris prosecutor Remy Heitz told reporters that a murder probe had been opened, while emphasising that no terror investigation had begun. All possibilities were being explored, including that of a personal conflict, sources close to the investigation told AFP.

The attacker, a 45-year-old IT worker in the police intelligence department, had converted to Islam 18 months ago, the sources said.

He killed three male officers and a female assistant before being shot in the courtyard of the square stone building next to Notre-Dame cathedral in the historic heart of Paris.

The man, who was born in the French Caribbean territory of Martinique and had worked for the police since 2003, suffered from deafness, the sources said.

‘A very quiet person’
Police searched his home in a quiet residence in Gonesse, a low-income suburb north of Paris, and took his wife into custody for questioning, Heitz told reporters.

“He was a very quiet person. I used to see him going to the mosque but he practised (his religion) in a normal way,” a neighbour, who asked not to be named, told AFP. Local residents said the man had two children aged 9 and 3.

Interior Minister Christophe Castaner said the assailant had “never shown any behavioural problems” throughout his years of service.

The police were “particularly stricken by this exceptionally grave incident”, said Castaner, who postponed a planned trip to Greece and Turkey to visit the scene with President Emmanuel Macron.

Addressing a public meeting later in the southern town of Rodez, Macron called the attack a “veritable tragedy” and described the perpetrator’s colleagues as being “in a state of shock”.

The assailant used a kitchen knife to stab the three policemen in their offices before going on to attack the female employee on the staircase.

In the courtyard, he was confronted by an officer who ordered him to drop the knife. When he refused, the officer shot him in the head, police sources said.

Heitz said he was “in constant contact” with anti-terrorism investigators about the case but that for the moment it was being handled by his office.

The police building was cordoned off after the lunchtime attack and dozens of police and emergency vehicles converged at the scene.

“People were running everywhere, there was crying everywhere,” said Emery Siamandi, an interpreter who was in the building when the attack happened.

“I heard a shot, I gathered it was inside,” he told AFP. “Moments later, I saw police officers crying. They were in a panic.”

“Did he snap, or was there some other reason? It’s still too early to say,” Loic Travers, head of the Alliance Police union for the Paris region, told BFM television.

Thursday’s killings come amid growing tensions within the ranks of the police, who have been stretched to the limit after a year of trying to contain weekly “yellow vest” anti-Macron demonstrations.

Thousands of police officers marched in Paris Wednesday for better working conditions, a rare protest that took place against the backdrop of a spike in police suicides — 52 so far this year.

“This purely human drama, which has nothing to do with our profession, could have happened in any company,” commented the union Unite SGP-Police.

But the police have also been a recurring target of jihadist groups, such as Islamic State, behind a wave of attacks in France since 2015, from large synchronised assaults to isolated knife and gun attacks.

In January 2015, two police officers were among 12 people killed when gunmen stormed the Paris offices of satirical weekly Charlie Hebdo. A day later, a policewoman was shot dead in southern Paris.

In June 2016, a police couple were stabbed to death in their home in a suburb west of Paris by a man claiming allegiance to IS, who broadcast the attack live on Facebook.

And in April 2017, a man opened fire on a police van on the Champs-Elysees in Paris, killing an officer and wounding two others along with a pedestrian.

At least 15 people were killed following an attack on a convoy transporting traders in a town in northern Burkina Faso on Friday, the government said on Saturday.